Map of the Red Sea in Ancient Times. This map show where the children of Israel might have escaped Egypt through the Red Sea. Any exact location is speculative. Exodus Images and Notes

The Book of Exodus

Exodus 20:2 - I [am] the LORD thy God, which have brought thee out of the land of Egypt, out of the house of bondage.
Exodus 20:3 - Thou shalt have no other gods before me.

Map of the Red Sea in Ancient Times (Click to Enlarge)

Summary of The Book of Exodus

The second book of Moses, also known as the second book of the Pentateuch is called "Exodus" because of all the events that take place in the first half of the book. The the clear focus is the departure of the children of Israel from Egypt. The word, "exodus" is derived from a Greek word meaning "going out." Hundreds of years elapsed between the time of the events described in the closing chapters of Genesis and those of the beginning of Exodus. The exact number of years between the migration of Jacob into Egypt until the exodus is given as 430 (Exodus 12:40-41). At the end of the book of Genesis the Hebrews were living in the fertile land of Goshen and was being fed from the granaries of the Pharaoh of Egypt. In the beginning of the book of Exodus the Hebrews are seen as slaves of the Egyptians, a nation without a country or a national unawareness of their calling from God. Exodus shows the development of Israel and the birth of a real nation, and the promises of God to Abraham begin to unfold. 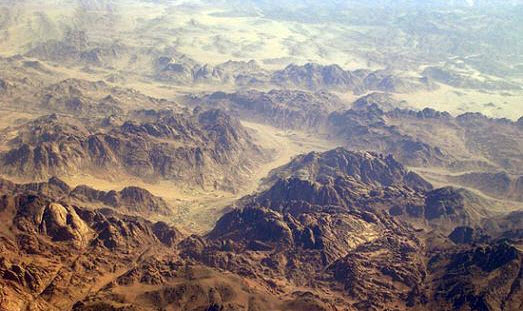 The Tabernacle of Moses 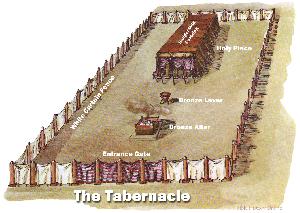 The ancient Tabernacle of Moses illustration with the curtain fence, the bronze laver, the bronze altar, the holy place, and the badger skin covering. (Click to Enlarge)

Outline of the Book of Exodus

1) The sufferings of Israel (1:8-7:7). This section includes the birth, education and flight of Moses; his call to be deliverer of his people and his consequent return from Midian to Egypt; and his first ineffectual attempts to prevail upon Pharaoh to let the Israelites go, which resulted only in an increase in their burdens.

2) A manifestation of God's providential guidance of Israel, illustrated by the ten plagues (7:8-13:16). This section also includes the account of the observance of the first Passover (ch. 12).

3) The guiding of the people of Sinai (13:17-18:27), which tells of the departure and the miraculous crossing of the Red Sea. This section also contains a narrative of the principal events on the journey from the Red Sea to Sinai, including the coming of the manna, the observance of the Sabbath, the supply of water from the rock at Rephidim and the advice of Jethro concerning the civil government of the great mass of people.

4) The making of the covenant at Sinai, together with the reception of the Ten Commandments (19:1-24:18). The laws recorded in this section regulated the religious, civil, and social life of the Israelites.

6) The renewing of the covenant after the sinful actions of the Israelites in connection with the making of the golden calf (32:1-35:3).

7) The actual building and dedication of the tabernacle of the Lord (35:4-40:38), under the supervision of the two master craftsmen, Bezalel and Oholiab.

Exodus is a book of redemption in which God delivers His people out of bondage and brings them into a special relationship with Himself.

Israel During the Book of Exodus

The World During the Book of Exodus

The Exodus of the Hebrews From Egypt

The Red Sea at the Time of Moses

Moses and the Exodus
The Giving of the Law
The Tabernacle