Matthew 2:2 "Where is He who has been born King of the Jews? For we saw His star in the east, and have come to worship Him."

2. Saying, Where is he that is born King of the Jews?--From this it would seem they were not themselves Jews. (Compare the language of the Roman governor, Joh 18:33, and of the Roman soldiers, Mt 27:29, with the very different language of the Jews themselves, Mt 27:42, &c.). The Roman historians, SUETONIUS and TACITUS, bear witness to an expectation, prevalent in the East, that out of Judea should arise a sovereign of the world.
for we have seen his star in the east--Much has been written on the subject of this star; but from all that is here said it is perhaps safest to regard it as simply a luminous meteor, which appeared under special laws and for a special purpose.
and are come to worship him--to do Him homage, as the word signifies; the nature of that homage depending on the circumstances of the case. That not civil but religious homage is meant here is plain from the whole strain of the narrative, and particularly Mt 2:11. Doubtless these simple strangers expected all Jerusalem to be full of its new-born King, and the time, place, and circumstances of His birth to be familiar to every one. Little would they think that the first announcement of His birth would come from themselves, and still less could they anticipate the startling, instead of transporting, effect which it would produce--else they would probably have sought their information regarding His birthplace in some other quarter. But God overruled it to draw forth a noble testimony to the predicted birthplace of Messiah from the highest ecclesiastical authority in the nation.

Where In Scripture does it talk about The worshiping Jesus Christ?

Brief Summary: Matthew chapter two covers the visit of the Wise Men, Joseph and Mary's flight to Egypt with Jesus, the slaughter of the infants in Bethlehem, and Joseph and Mary's return from Egypt to Nazareth.

Detailed Summary: Matthew chapter two confirms the birth of Jesus in Bethlehem of Judaea, and that it was during the time that Herod the Great was ruling as king in Jerusalem. Wise Men (Magi) came from the east to Jerusalem inquiring about where the king of the Jews was who had just been born in Jerusalem. Herod was very troubled by this statement and so was the city of Jerusalem. He called in the chief priests and scribes demanding to know where the Messiah was to be born according to the Jewish beliefs. They responded Bethlehem and quoted to him the prophecy of Micah 5:2 in the Jewish Scriptures. Herod called the wise men in asking exactly when the star had appeared. He sent them to Bethlehem and told them to let him know when they find him so he can come worship him also. When they left Jerusalem they came to Bethlehem and once again saw the star which they had seen in the east and they became very excited and rejoiced. The star went before them and guided them to the house where the child was and stood over the child. They entered the house and saw the child with Mary His mother, and they fell down and worshipped Him. They opened their treasures and presented to him gold, and frankincense, and myrrh. When they departed they left for their own country another way because they were warned in a dream not to return to king Herod. The angel of the Lord also warned Joseph to depart for Egypt until it is safe because Herod will seek out the child to kill Him. They departed that very night for Egypt, and they remained there in Egypt until Herod had died. Matthew attributes this temporary sojourn in Egypt as a direct fulfillment of prophecy. When Herod found out that the wise men had departed secretly he was enraged, and he ordered the slaughter of all infants 2 years and under in Bethlehem and along the coasts. Matthew also attributes this event to the words of the prophet Jeremiah. Once king Herod had finally died the Lord revealed to Joseph that it was safe to return to the land of Israel. The Lord also warned Joseph about Herod's son Archelaus and they brought Jesus to a city in the area of Galilee called Nazareth. Matthew also attributes this to the word of the prophets.

Key Concept: Jesus was the virgin born king by royal descent and Son of God with no human father by blood (Matthew 1:18)

Matthew 2:1-2 Now when Jesus was born in Bethlehem of Judaea in the days of Herod the king, behold, there came wise men from the east to Jerusalem, Saying, Where is he that is born King of the Jews? for we have seen his star in the east, and are come to worship him.

Matthew 2:9 When they had heard the king, they departed; and, lo, the star, which they saw in the east, went before them, till it came and stood over where the young child was.

Matthew 2:11 And when they were come into the house, they saw the young child with Mary his mother, and fell down, and worshipped him: and when they had opened their treasures, they presented unto him gifts; gold, and frankincense, and myrrh.

Matthew 2:23 And he came and dwelt in a city called Nazareth.

Numbers 24:17 I shall see him, but not now: I shall behold him, but not nigh: there shall come a Star out of Jacob, and a Sceptre shall rise out of Israel, and shall smite the corners of Moab, and destroy all the children of Sheth.

Isaiah 11:1-2 And there shall come forth a rod out of the stem of Jesse, and a Branch shall grow out of his roots: And the spirit of the LORD shall rest upon him.

Jeremiah 23:5 Behold, the days come, saith the LORD, that I will raise unto David a righteous Branch, and a King shall reign and prosper, and shall execute judgment and justice in the earth.

Of the Gospel writers only Matthew records the genealogy of Jesus through Joseph, the visit of the Magi, the flight into Egypt, and the murder of the infants.

Matthew mentions the wise men but does not mention how many, and out of their treasures they gave to him three gifts: gold, and frankincense, and myrrh.

Jesus could have been anywhere from 40 days to 2 years old when the magi came to worship Him.

Matthew records that the wise men presented the gifts of gold, and frankincense, and myrrh out of their treasures.

The wise men fell down and worshipped Jesus as deity. The Bible is clear that you shall worship the LORD your God only and Him only shall you serve.

The wise men did not follow a star but the star that appeared to them in the east reappeared in Bethlehem and led them to the house and stood over where the child was.

Matthew records that Jesus was no longer in a manger but in a house.

Matthew does not indicate that the Magi were kings or where they were from, it only says, "the east."

It is interesting that after the 70 year Babylonian captivity when the Persian leader Cyrus gave the decree for the Jews to return and rebuild their Temple that only few Jews actually returned from Babylon.

Many in Israel were expecting the Messiah to come because of the prophecy of Daniel about the 70 weeks.

There is no indication where they journeyed to in the land of Egypt.

There is no historical evidence whatsoever of Jesus in Egypt or what happened while Joseph, Mary, and Jesus were there.

37 BC Coins Mentioning King Herod
These coins are among the proof that the Biblical King Herod the Great was a factual person in history.

People in History
King Herod I (The Great)

Herod was the name of several men of the royal dynasty which originated in Edom or Idumea after it had been forced to adopt the Jewish religion by John Hyrcanus in 125 B.C. This family ruled in Israel as vassals of Rome. The history of this dynasty, which succeeded that of the Maccabees, largely relates to the political history of Israel during this whole period.

Herod I (the Great) was son of Antipater and made king by the Romans in 40 B.C. He managed to keep hold of his throne in the face of the many changes in the government at Rome.

His kingdom comprised Judea, Samaria, Galilee, Idumea, Batanea, and Peraea, which was approximately the same size as the kingdom of David and Solomon.

Although Herod had exceptional leadership skills, he was extremely disliked by the Jews. His attitude toward the Maccabean dynasty, to which he was related by marriage, along with his insolence and cruelty, angered them all the more. He even had his brother-in-law and several of his wives and sons executed.

He forced heavy taxes and brutally repressed any rebellions. But it was by his policy of Hellenistic culture that he greatly wounded the Jews. The construction of a race-course, a theater, and an amphitheater in Jerusalem, his wide support of the emperor cult in the East, and the construction of pagan temples in foreign cities at his own expense could not be forgiven, even though he restored and reconstructed the Temple of Jerusalem and continually pleaded the cause of the Jews of the Diaspora to the emperor to his own gains.

There was no close tie between the king and his people; he remained an Edomite and a friend of Rome, only holding on to his power by the use of a merciless military force. This is the same Herod the Great who massacred the children of Bethlehem (Matt. 2).

Herod suddenly died in 4 BC. After his death, the Emperor Augustus made three of Herod?s sons the rulers of different parts of their father's kingdom.

Herod's son, Archelaus (Matt. 2), obtained Judea and Samaria. He was a tyrant like his father and lacked his fathers ambition and talent. He irritated the Jews and Samaritans so intensely that Augustus deposed him in 6 A.D. and placed a Roman procurator over his kingdom.

Herod's other sons were Antipas, Philip, Agrippa I, and Agrippa II. After Agrippa II died the Herodian dynasty disappeared from the stage of history.

Genealogical chart of the Herodians 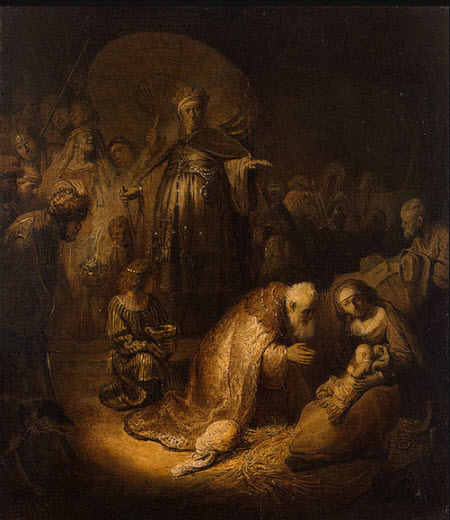 Adoration of the Magi, by Rembrandt 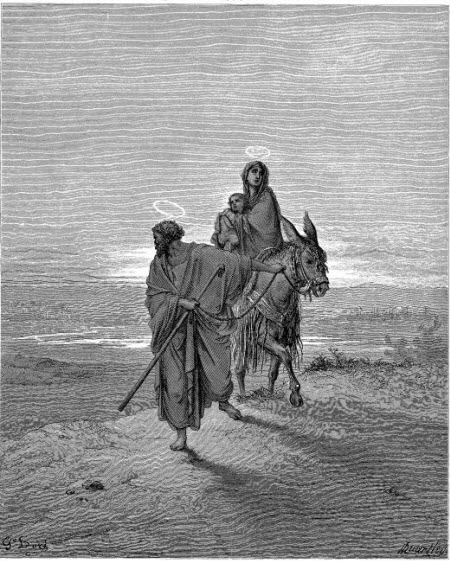 The Flight Into Egypt Painting by Gustave Dore

Bethlehem is about five miles S of Jerusalem, and elevated 2,460 feet above sea level.

There was much history in this little town. Rachel died and was buried here. Boaz and Ruth were wedded and dwelt in Bethlehem. David was born in Bethlehem, and here he was anointed as future king by Samuel (1 Sam 16:1); here was the well from which David's three heroes brought him water (2 Sam 23:15-16), it was the birthplace of the Messiah (Mic 5:2 Mt 2:1), and its male children were slain by order of Herod (Mt 2:16, Jer 31:15).

It was originally called Ephrath

In Bethlehem today stands the Basilica of the Nativity, marking the traditional site of the birth of Christ.

Painting of the Massacre of the Innocents by Nicolas Poussin.