The Book of 2 Peter

2 Peter 1:4 - Whereby are given unto us exceeding great and precious promises: that by these ye might be partakers of the divine nature, having escaped the corruption that is in the world through lust.

2 Peter 1:20-21 - Knowing this first, that no prophecy of the scripture is of any private interpretation. For the prophecy came not in old time by the will of man: but holy men of God spake [as they were] moved by the Holy Ghost.

2 Peter 3:9-10 - The Lord is not slack concerning his promise, as some men count slackness; but is longsuffering to us-ward, not willing that any should perish, but that all should come to repentance. But the day of the Lord will come as a thief in the night; in the which the heavens shall pass away with a great noise, and the elements shall melt with fervent heat, the earth also and the works that are therein shall be burned up.

2 Peter in The New Testament - A Brief Overview 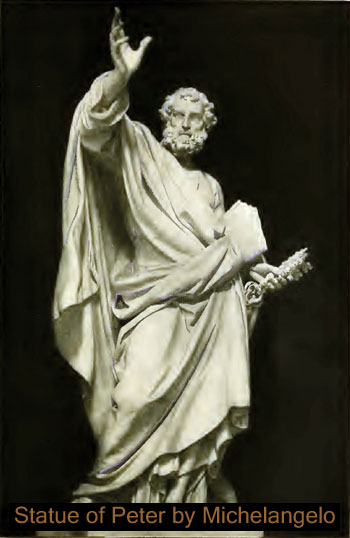 Statue of Peter by Michelangelo

Introduction to The Book of 2 Peter

Summary of The Book of 2 Peter

Author. The writer of this epistle identifies himself in 2 Peter 1:1 as Simon Peter. He indicates that he was present at the transfiguration (2 Peter 1:16-18). He further suggests an awareness of the prediction which Christ made to him (2 Peter 1:12-14 compare with John 21:13, 19). Although the authorship of this book has been questioned, most scholars believe it is from Peter himself. The writer is a devoted believer who appears to be sincere, and not the sort of person who would blatantly deceive his readers.

Date. Peter wrote this epistle sometime before his death under the persecution of the Emperor Nero which happened in 64 AD. Peter may have written this epistle in 67 AD.

Outline of the Book of 2 Peter