The Life of Jesus in Harmony | Index Alabaster Flask

Mark 14:3 - And being in Bethany in the house of Simon the leper, as he sat at meat, there came a woman having an alabaster box of ointment of spikenard very precious; and she brake the box, and poured [it] on his head.

The Bible mentions an alabaster flask or box or more accurately "an alabastron", a small container which was filled with costly spikenard (perfumed oil). Mary came to the house of Simon the leper to anoint Jesus by breaking the jar and pouring the spikenard on his head in Mark 14. In the ancient world one of the purposes for anointing the head was to show respect and honor to the person receiving it. This is still seen in many parts of the oriental world today. Alabaster was a soft stone resembling marble, and many of these jars came from Egypt. Alabaster jars contained many interesting colors, some were translucent with veins of yellow, brown, and red. The alabaster jar usually contained olive oil, or a costly ointment or perfume. It had a long neck designed to restrict the flow and prevent waste. Mary broke the top in order to pour out the spikenard. 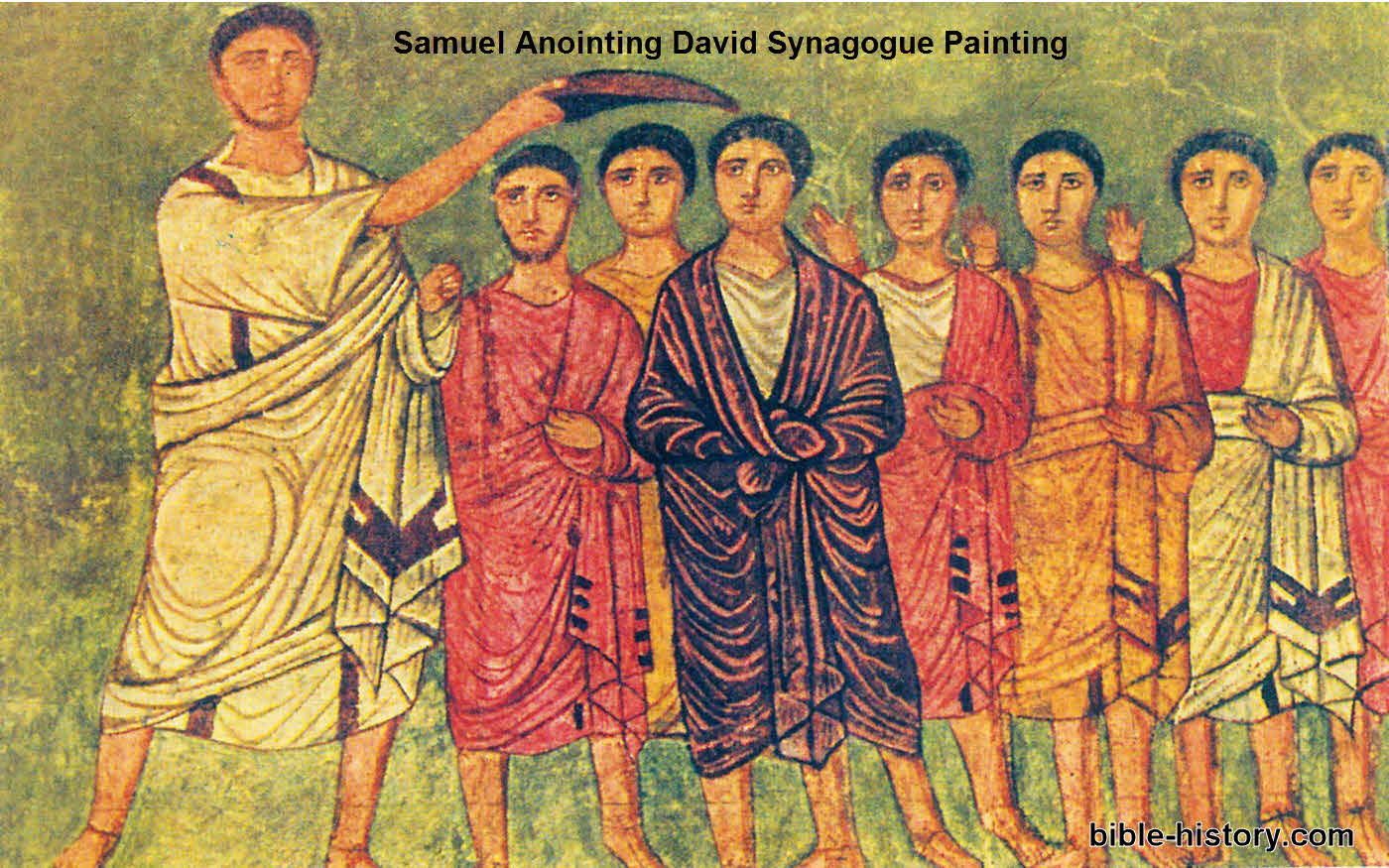 The above painting is a 3rd century wall painting in the synagogue at Dura Europas in Syria, it shows young David being anointed as the future king of Israel by the prophet Samuel with oil. The word "Messiah" comes from the Hebrew word "Meshiach" which means "the anointed one" or to "smear the anointing oil." Ancient Hebrew kings were consecrated to God with the anointing oil.

FLASK (Heb. pak, (2 Ki 9:1,3); Gk. alabastron, <Mark 14:3>). A container usually narrowed toward the outlet and used for holding liquids such as oil, ointment, or perfume. . The KJV uses "box of oil" or "box of ointment," whereas the NASB rendering is "flask of oil" or "vial of . . . ointment," and the NIV, "alabaster jar." ALABASTER (Gk. alabastron, (Mark 14:3); Heb. shesh, (1 Chr. 29:2); translated "marble" in the KJV and NIV). Identified with the substance now called oriental (or Egyptian) alabaster, also "onyx marble." The most common form of alabaster is a fine textured variety of massive gypsum (sulfate of lime). It is very soft and therefore excellent for carving. The color is usually white; but it may be gray, yellow, or red. Large quantities of gypsum were quarried in the Jordan Valley in the days before the Hebrew people occupied this territory. Many articles were fashioned from this stone, including vases, jars, saucers, bowls, lamps, and statues. Mary of Bethany anointed Jesus with costly oil from a flask made of alabaster (Mark 14:3). The ancient variety of alabaster is known as "oriental alabaster" (carbonate of lime), a form of marble. It is much harder than the gypsum variety but is used for the same purpose. Ancient alabaster was found only in Egypt. Today the name alabaster is applied to a still softer stone, the compact variety of gypsum, or sulphate of lime, used for small statuettes, paper weights, and little ornaments of no great value. The alabastrites of Theophrastus, Pliny, and the ancients generally was largely quarried and worked at Alabastron, a well-known locality near Thebes, and was the favorite material for the little flasks and vases for ointment and perfumery that are so abundant in Egyptian tombs and almost all ancient collections.

The Life of Jesus

An Outline of The Life of Jesus in Harmony

"I marvel that whereas the ambitious dreams of myself, Caesar, and Alexander should have vanished into thin air, a Judean peasant - Jesus should be able to stretch his hands across the centuries and control the destinies of men and nations."  - Napoleon I Bonaparte (1809)

The Birth of John the Baptist

The History of the Birth of Jesus

The Decree of Augustus Caesar and the Birth of Christ (Lk 2:1-7).

The Beginning of His Ministry

The Feast of Tabernacles

The Feast of Dedication